French language Lecturer at the School of Liberal Arts and Acting-Director of the French-Upper Mekong Sub-region Academic Cooperation Centre at MFU Miss Flavie Lepoutre has been awarded the honorific title of Chevalier (Knight) from theOrdre des Palmes Académiques (Order of Academic Palms). The award recognizes her outstanding role in cooperation between France and Thailand, as well as in the expansion of French Art and Culture abroad.

The title was created by Emperor Napoléon for the University of Paris to honour the achievements of its members. Later, the scope of the award was expanded and now includes major contributions to French national education and culture through the spreading of French culture throughout the rest of the world.Nomination decisions are made by the Prime Minister based on recommendations by the Minister of Education.

The ceremony to honour Miss Flavie will be held on 23 March 2017 at the Residence of France, Bangkok, and the title will be presented by His Excellency Mr. Gilles Garachon, Ambassador of France to Thailand. 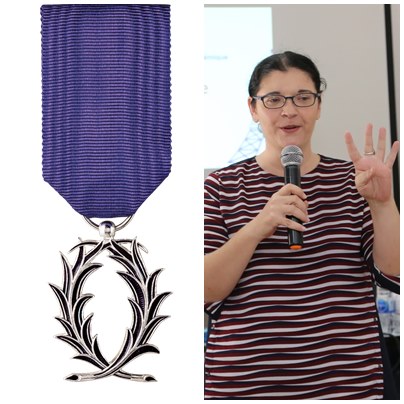