Mae Fah Luang University would like to congratulate students from the Chinese Studies programme, the School of Sinology who won the first place, the second place, the forth place and the popular vote in the 19th Chinese Bridge Chinese Proficiency Competition for Foreign College Students held online on 28 June 2020 by the Office of Higher Education Commission, the Education Office of the P.R.C Embassy in Thailand and the Confucius Institute Headquarters Hanban Thailand Office.

This year, the final round of the Chinese Bridge" Chinese Proficiency Competition for College Students in Thailand held via online live broadcasts and online voting. The competition consisted of three parts including quizzes regarding Chinese culture, impromptu speech on a topic ‘one world one family’ and talent show.

In the preliminary round of the competition, out of 105 contestants from 19 universities in Thailand, six MFU students were qualified for the finals. Successfully, three students smashed their way to the victory in this competition as follows:

The second place and the popular vote belonged to Ms. Phatcharapohn Prasertsoong;

All MFU students were supervised by Ms. Fang Yuan, a lecturer from the School of Sinology. Moreover, Ms. Sansanee Chaiain will be a representative of Thailand to compete in the finals in China.

The "Chinese Bridge" Chinese Proficiency Competition is an annual international contest sponsored by Hanban with aims to arouse the enthusiasm of students in various countries in learning Chinese and strengthen the world's understanding of Chinese language and culture. 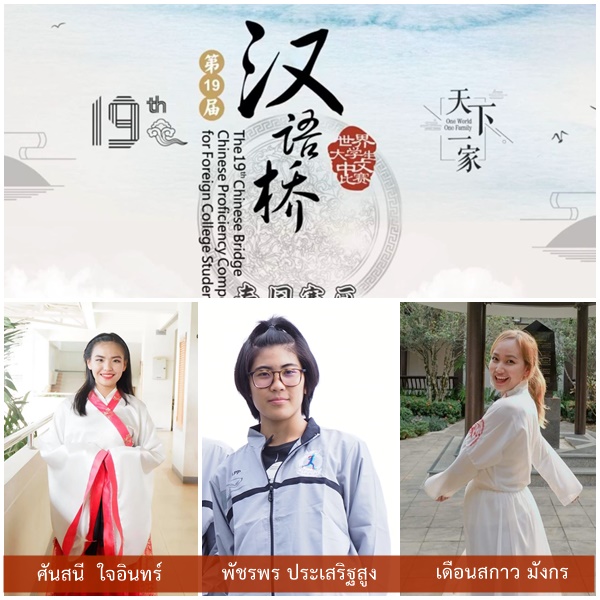